Girls on the Red Square 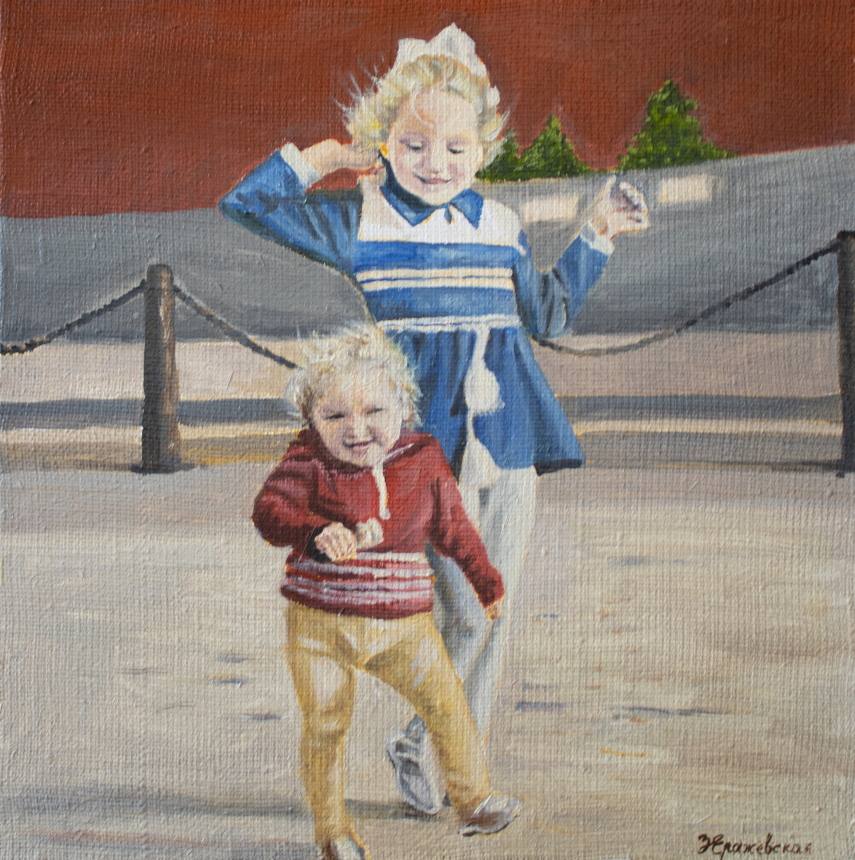 Girls on Red Square are spotted while playing catch-up. Children remain children regardless of their location. While their parents are fascinated by the sights of the ancient capital, the girls just play carefree. Red Square includes a whole range of unique attractions, each of which deserves special attention. The list of the most interesting historical, religious, architectural and cultural monuments is impressive. St. Basil’s Cathedral: one of the most beautiful Orthodox churches in Russia was built in the middle of the 16th century in the central part of Red Square by order of Ivan the Terrible. The official name of the religious complex is the Cathedral of the Intercession of the Most Holy Theotokos, but among the people it is better known as the Cathedral of St. Basil the Blessed. Handmade oil painting.

The stunning aesthetics of the cathedral has not lost its grandeur even in the troubled times of wars and the struggle against religion. The interior decoration of the temple is not inferior to its external beauty. It houses unique examples of monumental painting, ancient frescoes and rare Russian icons. The cathedral can be visited with an excursion group or on your own by coming to the service. The monument to Kuzma Minin and Dmitry Pozharsky, located near the Cathedral of St. Basil the Blessed, is a symbol of the struggle of the Russian people with the interventionists. The majestic sculptural composition is dedicated to national heroes who, at the turn of the 16th and 17th centuries, in a difficult time for the country, united the townspeople and peasants, led the people’s militia and thanks to this were able to defeat the Polish invaders. The first Moscow monument to folk heroes was created in 1818 by the famous sculptor Ivan Martos. Spasskaya Tower Among the twenty Kremlin towers, Spasskaya is considered the main one. It is it that is decorated with a five-pointed ruby ​​star, installed in 1935, and the famous Kremlin chimes. The tower was built by a famous Italian architect in 1491 and served as the main entrance to the Kremlin. This architectural structure received its name in honor of the image of the Savior of Smolensk, painted above the gate from the side of the square. Lobnoe Mesto on Red Square Lobnoe Mesto is a monument of ancient Russian architecture and a symbol of tsarist autocracy. Rumor has it that criminals were publicly executed on this walled platform. However, the facts indicate something else: the Execution Ground served as a platform for the announcement of royal decrees and a platform for official events. Historians believe that its name is associated with its territorial location: in the Middle Ages, the beginning of the Vasilievsky Spusk was popularly called the «forehead».