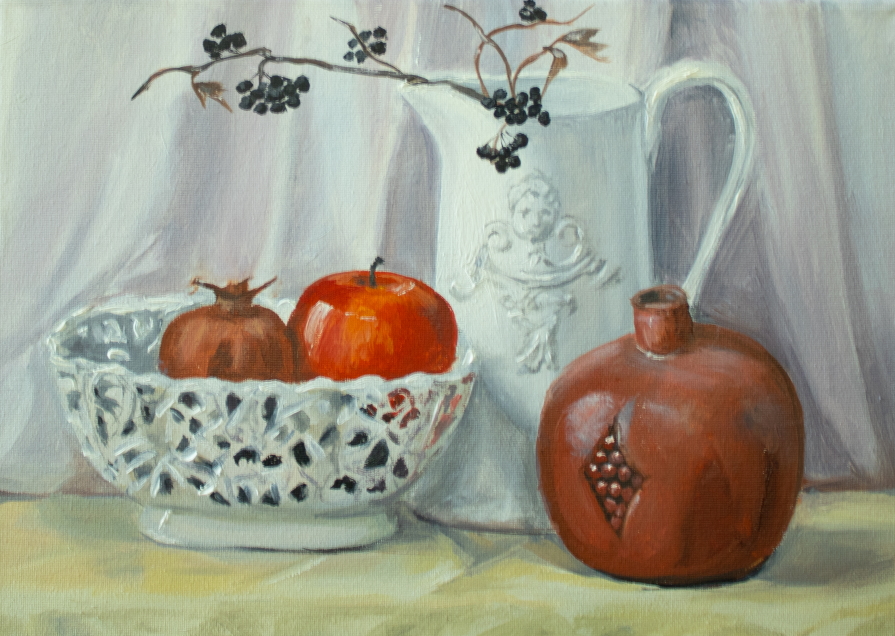 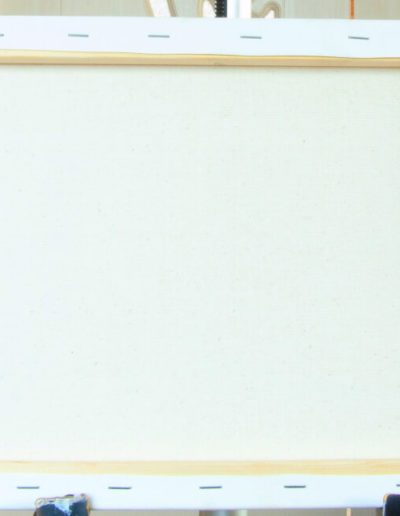 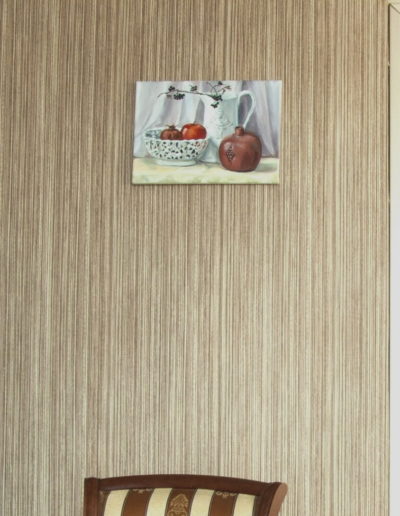 White still life: this oil painting was created by the artist in order to show how complex white color can be combined and harmonized with any space and unexpected objects around. The picture seems to glow from the inside and soothes the environment around it. There is no such separate genre of «white still life». There is no genre, but there are paintings. They were created in different countries and at different times. They are united by a common philosophy of color and a common inner music. The first to experiment with white were the main experts in still lifes — the Dutch. Handmade oil painting.
Wine, grapes, bread, tablecloth, peeled lemon, shine of silver. Such still lifes became the prototype of stylizations and artistic games of the future. Creating such works, the artist jokes with the viewer, because there is no white in them. Our brain endows this property with objects of different textures, such as salt, flower petals, the mother-of-pearl surface of an oyster shell, a milk jug, a fragile egg shell, and polished metal. White is not on canvas. White is in our thoughts and an established understanding of the subject.
At the turn of the 19th and 20th centuries, this game was continued by the Russian artist of Swiss origin, Peter Nilus. In addition to his artistic activities, Nilus is known as a literary critic and writer. A creative person in several fields at once, he worked in many genres and in the end created a whole series of «white paintings», as he called them.
These paintings correspond to the spirit of the times — they are a mixture of realism and post-impressionism, which is later transformed into realism.
Signs of a new era appear here — a faceted glass with sour cream, an enameled coffee pot, a tin can. For example, the later works of the artist Imants Vecozols (born in 1933, Latvia), which are closer to the «harsh» style, and nevertheless retain the variegated colors of the whiteness of objects.
Henk Helmantel (born 1945) is a contemporary Dutch artist working in the traditional technique of the old masters. It is not objects that are attributed to the modernity of the viewer, but the style of performance itself — photorealism.

See other paintings by Evgenia Zragevskaya here: Girls on the Red Square

The award-winning portrait of the artist’s mother, Miriam Escafet, is not a discovery at all. This is a synthesis of genres and nothing more than a continuation of the theme of white still life using photorealism and digital processing techniques. Distortion of the proportions of the teapot, forked plate. The symbolism of the picture is absurd and does not refer to archetypes. Before us is a static image, only the headless figure of Nika of Samothrace is moving, follow its blurred outline. Empty dishes and a headless figurine are strange symbols for the image of the mother. Two rings on the finger, one of which apparently belonged to the deceased husband, also does not add clarity to the picture «The Angel at My Table». As if the conceived story of these objects does not add up, leaving the viewer bewildered.
But the white still life doesn’t end with Miriam Escafet. It is painted by artists from different continents.