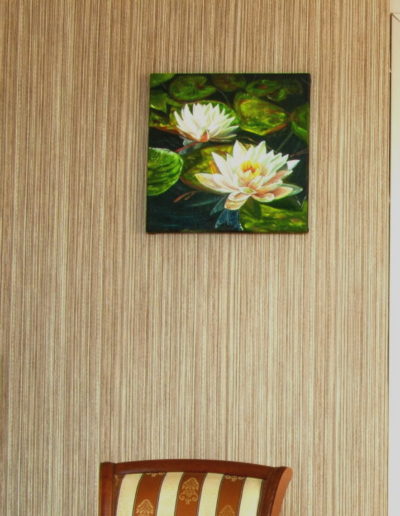 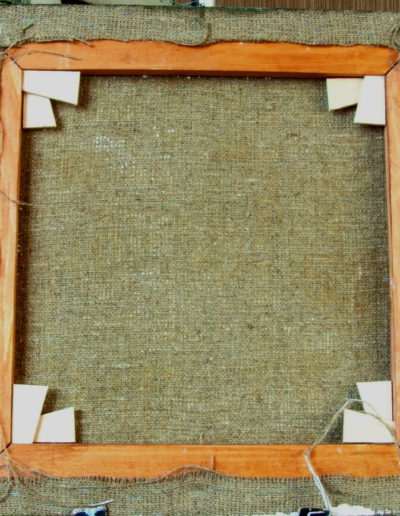 Water lily is a nenuphar flower according to an ancient Greek legend — it is a prototype of a nymph who turned into a plant from unrequited love for the great Hercules. The beauty of the goddess went to a water lily with the ability to heal fever and insomnia. In Russia, the white nenuphar was considered the talisman of mermaids. If you notice large flowers on the water with rounded leaves floating on the surface, then this is a white water lily, or nymphea. A nenuphar with this color is an endangered species and is listed in the World Red Book.
The water lily is often called the «child of the sun», because its beautiful flowers open in the morning and close at dusk. She also has another name — a mermaid flower. How did she deserve it? Handmade oil painting.

In ancient times, when the trees were so high that the gods could watch people, sitting on their crowns, one of the daughters of the sea king fell in love with a beautiful elf. The young mermaid understood that her feelings were doomed and had no future. She stopped floating to the surface of the sea so as not to see the elf fluttering over the waves, waiting to meet her. From heaven, a little star was watching the lovers. She decided to help them be together — she turned the little mermaid into a snow-white water lily and transferred her to a clean lake. At dawn, the star whispered to the elf that his beloved was waiting for him on a date and from now on they would always be together. Since then, it has been believed that each nenuphar has its own elf. He never leaves her petals and dies with her.
Flowers with pointed petals and rhizomes floating on the water. Petiole leaves. The size varies depending on the species. The underwater part is filamentous roots, and during the fruiting season, a polysperm with a mucous membrane develops there. After ripening, the seeds float on the surface, then sink to the bottom and germinate. This is how natural reproduction takes place.
The leaves contain flavonoids, oxalic acid to aid in the absorption of calcium, and tannins. Nymphaea prefers bright sun, shade interferes with photosynthesis of large leaves. The bud also reacts to light: it blooms at sunrise, and hides under water at sunset. In order for a water lily to take root and grow well, it needs stagnant water or very little current. Water lily is a typical plant for fresh water bodies of Russia and Europe. Also native to the Middle East and introduced as a crop in China, Australia and New Zealand.
In addition to its decorative qualities, the water lily has medicinal properties. The root of the plant helps with hair loss, treats constipation, gastritis, enuresis. Freckles will go away after regularly rubbing the problem areas with water lily juice. Pharmacology uses the various constituents of the plant.
The water lily is not only an adornment of nature, but also an assistant in the fight against various diseases due to its healing properties. However, consumption should be treated with caution, as the plant is toxic, especially when raw.