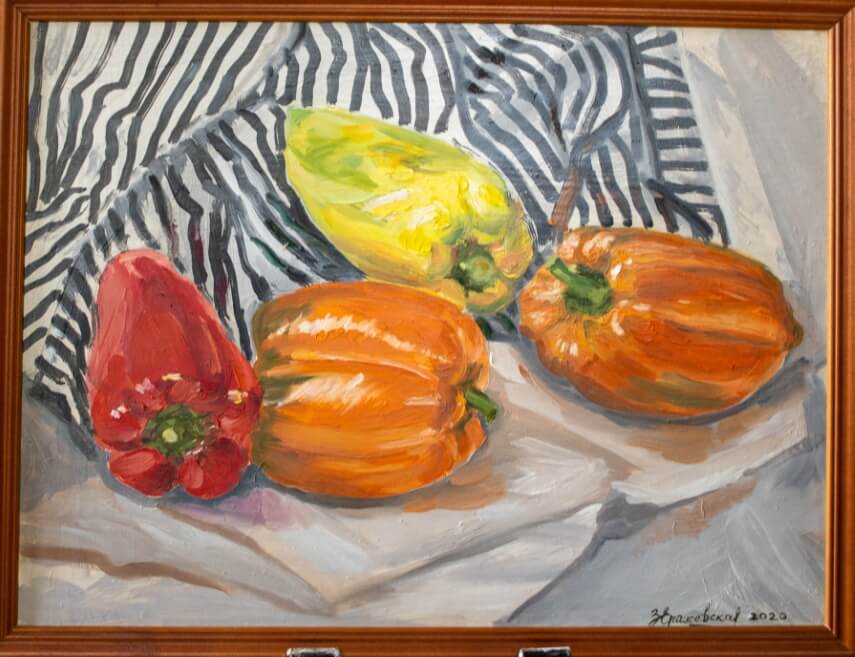 Peppers and stripes on the fabric create an interesting combination of shape and color. I got an image of how such different textures can be combined. Colorful convex side of pepper and cold black-white stripes of fabric. It’s amazing how oil painting allows such interesting experiments.
Peppers and stripes: in painting, still lifes are used quite often and have some inexplicable appeal for painting lovers. Sweet (Bulgarian) pepper is a very healthy vegetable that contains many vitamins. However, not all gardeners grow it on their plots, since the agricultural technology of pepper is not entirely simple. Getting a good harvest is somewhat more difficult than in the case of tomato-related tomatoes, but not so difficult as to deprive yourself of the pleasure of a tasty and healthy handsome man plucked straight from the garden. Sweet pepper is an annual plant with an erect stem no more than a meter in height. Branching depends on the variety; the stems can be either naked or pubescent. The leaves have various shades of green, ovoid or lanceolate in shape. Flowers are formed in forks, peduncles can be either drooping or erect, usually arranged in pairs or 3 pieces each. Handmade oil painting.

See other paintings by Evgenia Zragevskaya here: On the North sea

Pepper is considered the birthplace of South America, now it is ubiquitous. In Russia, most pepper is grown in the North Caucasus and the Lower Volga region. The use in cooking is varied: from fresh consumption, including in salads, to salting, pickling, preparing hot second courses, including stuffing. As additives, pepper is used in cooking soups, cooking various meat dishes, vegetable stews.
Growing bell peppers is not very easy, but exciting. It is available to any gardener who has minimal experience with the land and plants. The difficulty lies only in observing the temperature regime, since pepper is a very thermophilic culture.