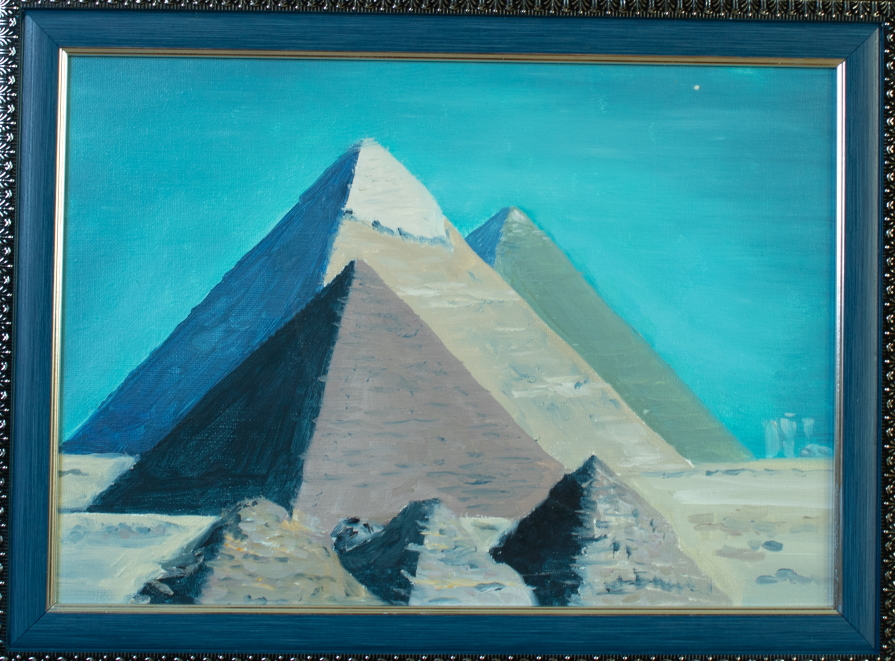 Mysterious pyramids: The Great Egyptian Pyramids of Giza are the most famous site on the African continent. The huge stone structures of Ancient Egypt are an architectural monument of antiquity. The Great Pyramids are located on the Giza plateau, in the Libyan desert, 8 km from the old city of Giza and 25 km from the capital of Egypt — the city of Cairo, where the fertile Nile valley borders on the hot sands of the Libyan desert. Stone buildings are the tombs of the powerful pharaohs of Ancient Egypt. The monumental pyramids are not so much a monument to the pharaohs as a glorification of human genius and creative labor. They were built 4.5 thousand years ago, and they still stand. Everything in the world is afraid of time, and time is afraid of pyramids. Handmade oil painting.

Scientists about the pyramids of Giza
The opinion of scientists about the purpose of the pyramids, erected on the edge of the Libyan desert, is ambiguous. There are many questions about construction technology. 200 years of archaeological research into the Great Pyramids only added to the questions of Egyptologist scientists who discovered 118 pyramids in Egypt.
Three main pyramids of Egypt
The ancient Egyptians believed that by dying, the pharaoh was reborn as the lord of the dead. If the corpse of Pharaoh «spoiled», then trouble will fall on Egypt. Therefore, the body of the pharaoh was mummified and everything that the king would need for the afterlife was placed in the grave with it. Relatives put clay vessels, precious stones and gold, furniture, food, even doll copies of servants.
As soon as a new pharaoh ascended the throne, he immediately began to prepare for death — to build a funeral dwelling-pyramid, for which he was choosing a place. The pyramids were built by the Egyptians who lived in the villages created by the pharaohs. Women also worked in the construction; they carried heavy stones along with men.
Stone blocks for the pyramids were prepared in the mountains. Holes were drilled in the stone along the perimeter of the block, into which wooden beams were driven. To make the tree swell, the beams were watered daily, and the stone cracked in the right direction. The block was hewn, polished and sent to the construction site of the pyramid.
The ships along the Nile brought 2.5 million blocks weighing 2.5 tons each, unloaded and dragged to the construction site along the previously laid «rails» of polished stone. Only people pulled the blocks on wooden runners, the force of animals was not used.
Scientists have put forward the theory of lifting multi-ton blocks to the pyramid. It is believed that an embankment was built near the pyramid, which was built up along with the structure. On the top of the embankment, wooden beams for runners were laid, on which stone blocks were dragged. When the construction was over, the embankment was destroyed. The remains of embankments and beams were discovered by archaeologists at the construction site in Lishte.
Great Pyramids of Giza
The location of the pyramids was chosen by the astronomer priests. The «Father of History» Herodotus called the Egyptian pyramids at Giza the first wonder of the world. Scientists consider this miracle to be the greatest and most mysterious of all known to mankind. For example, the top of the Cheops pyramid is directed to the North Pole and «looks» at the North Star.