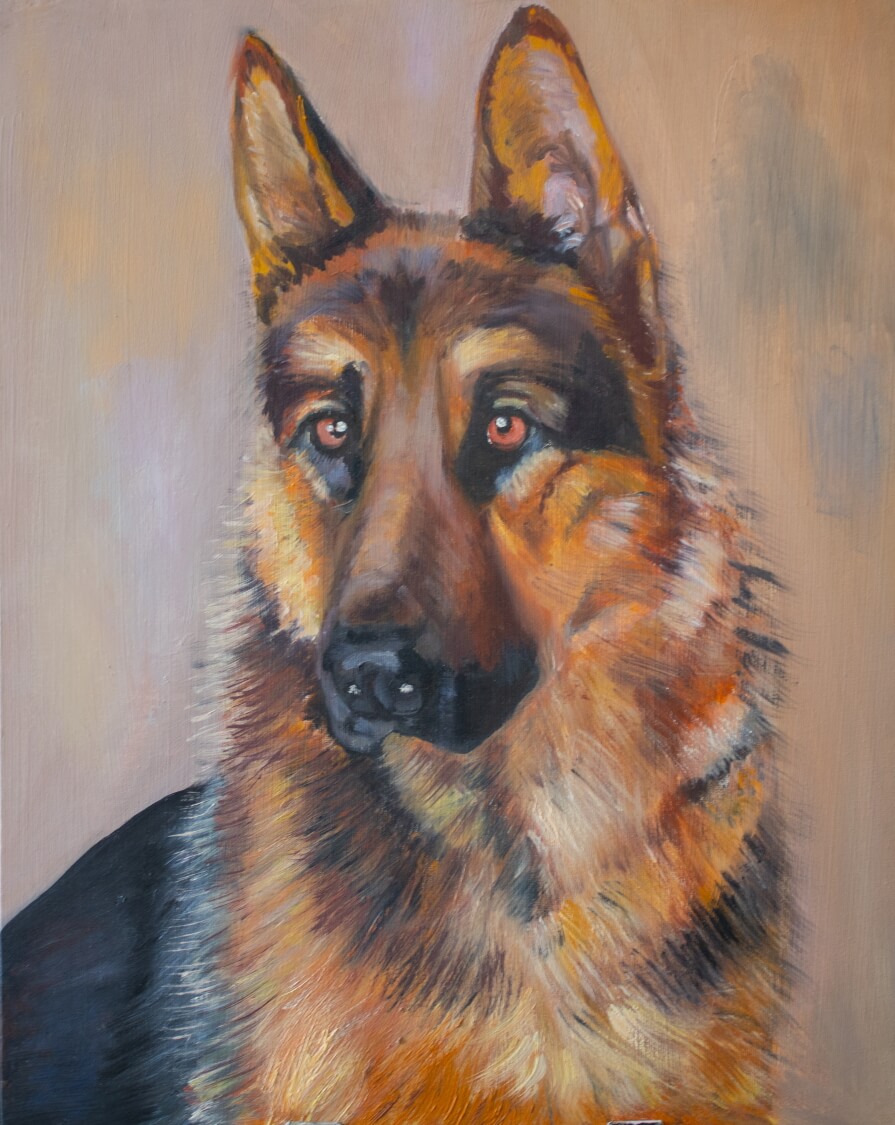 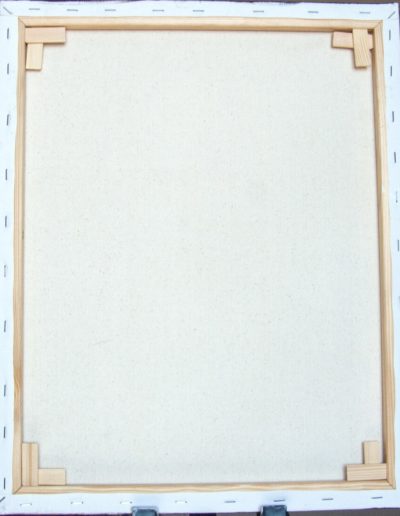 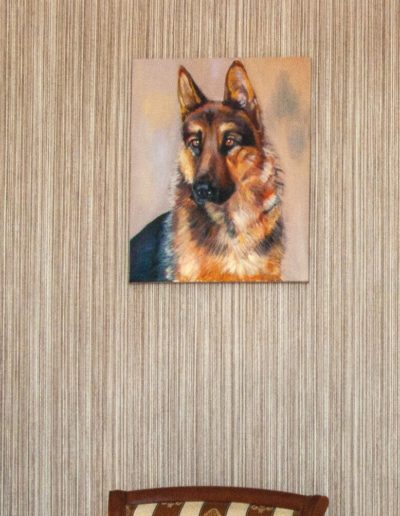 My dog ​​Black — German Shepherd is everyone’s favorite in our family. The German Shepherd has lived side by side with humans since time immemorial. Today she is one of the most popular and recognizable dog breeds on the planet. Handmade oil painting.
The German Shepherd is a regular at the top of the rankings of the smartest, most loyal, most trainable pets. The noble «faces» of these dogs often appear in news stories, on newspaper pages and even in the title roles of various TV shows. But the main vocation of the Germans is not an acting career, but the maintenance of order. They serve in the police, border and customs units, and assist in search and rescue operations. And at home, representatives of this breed protect the peace and property of the owners, give their owners a lot of positive emotions.

To trace the history of this breed of dog, it is enough to turn to official documents and eyewitness accounts. With German Shepherds, the situation is completely different. According to researchers, the beginning of the chain of their immediate ancestors should be sought in the depths of centuries. Archaeological finds indicate that even in the 4th millennium BC, animals lived on the territory of modern Czech Republic, Poland and Germany, the skeleton of which has many features similar to shepherd dogs. These were the consequences of the evolution of wild individuals who chose life near the sites of ancient tribes and became dependent on humans. It is assumed that even then some primitive selection was carried out, in the process of which the largest and most obedient puppies were selected.

The now non-existent small Indian wolf was increasingly moving away from its «free» relatives and gradually turned into the so-called dogs of the Bronze Age. The needs of people have changed over time. Not only farmers, but also pastoralists were in one way or another tied to a certain area. This means that four-legged satellites have new functions. In the Middle Ages, hofwarts were bred throughout Europe. This German word is translated as «guardian of the yard», but dogs were engaged not only in the protection of real estate.

Domesticated livestock needed reliable protection from ruthless predators and hunters for other people’s property. Given the growing number of herds and flocks, it was simply impossible to cope with such a task with the help of shepherds. It was then that the yard dogs came to the rescue. Of course, not everyone was suitable for such work, but only the most smart and hardy. They began to be selected and trained in a special way. And everything special is valuable, therefore, already in the 7th century, according to the laws of the ancient Germanic tribe of Alemans, a severe punishment awaited the culprit for killing a shepherd’s dog.

Of course, animals of the early Middle Ages, and much later eras, outwardly resembled little modern representatives of the breed. Fundamentally important for the so-called primitive German shepherd dogs were considered not the shape of the head and the position of the tail, but the corresponding intelligence, rather large dimensions and «psychological portrait». The fact is that the way of life of the shepherds presupposed prolonged isolation, during the grazing season the animals actually contacted exclusively with “their” person and had to not only obey him without question, but also become good companions to him.

By the 18th century, the situation had changed somewhat. Two regional types of German shepherd dogs took shape at once — the semi-long-haired Thuringian pale-gray color with a curling tail and the long-haired Württemberg black or red color with semi-erect ears. They also differed in character: the former were called active animals, prone to loud and frequent barking, and the latter could boast of calmness and endurance. My dog Black — in the name of a common cause, breeders from the central and southwestern lands decided to join forces.

The result of the painstaking work of enthusiasts was presented to the general public only at the end of the 19th century. Baron von Knigge brought two of his pets to the Hanover Dog Show in 1882, the males Greif and the Cuirass, as my dog Black. Later the owners of the Hannau kennel fueled interest in the new breed, who showed the public an impressive pair — large and strong-built Pollux and Prima. It was thanks to them that almost two dozen champions and winners of exhibitions of subsequent decades were born.

In 1891, the creation of the first German Shepherd Society was announced. The organization «Phylax» did not last long, but it managed to approve the breed standard.