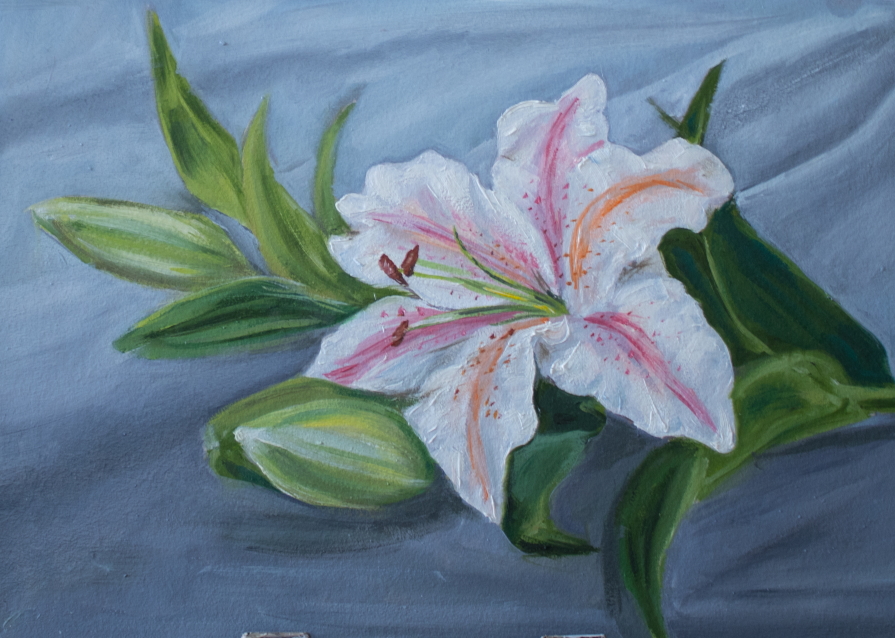 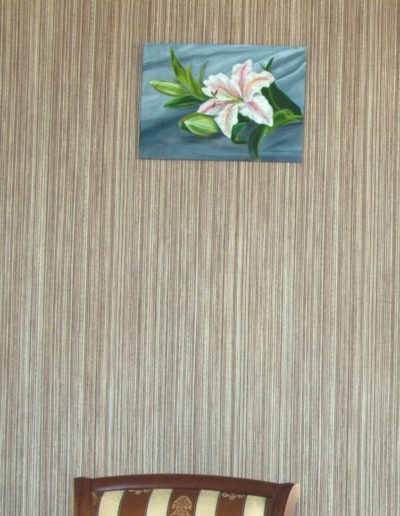 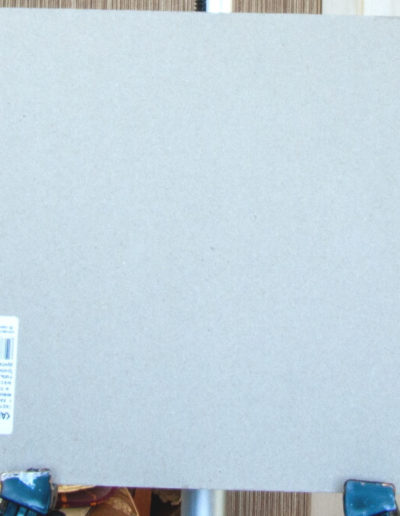 Lily on gray: this painting was painted by the artist to express the difficult to combine differences in our lives. Delicate and fragrant lily flower perfectly matches gray and cold silk fabric. It is with such unexpected contrasts that the beauty of nature manifests itself. Water lily — queen of bodies of water. In ancient Egypt, two types of seshen plant were known — water lily, which in the old fashioned way in the Egyptian literature is called «lotus»: white (Nymphaea lotus) and blue (Nymphaea cerulea). It was the white water lily that was from the New Kingdom the heraldic plant of Upper Egypt, while the blue lotus had a more sacred meaning and was largely associated with the funeral cult, since blue in Ancient Egypt is the color of mourning. Handmade oil painting.

Due to the fact that the water lily on gray flower appears above the water only at sunrise, it played a very important role in the Heliopolis cosmogonic tradition, according to which the solar deity appeared in the lily on gray flower from the waters of Nun, the eternal chaos. The statement that according to the Egyptian belief “the sun is born from a lotus” is only partly true. The real pink lotus (Nelumbo nucifera), was introduced to Egypt from Persia already in Late Time and rarely appears in the art of the Hellenistic era.
Lily was a symbol of rebirth, and therefore associated with the funeral cult. So, the wreaths with which the coffin and statues of the deceased were decorated were quite often made of water lily flowers, and the four sons of Horus, the patron gods of the deceased, associated with the northern part of the sky, were also depicted standing on a lily flower growing from under the throne of Osiris, lord another world. This flower symbolizes love and life and is used in almost every religious ceremony. There are many cases in history where flowers have received symbolic meaning in accordance with the prevailing culture and era. Flowers are often used as decoration for ceremonies and celebrations.
They grow in ponds, lakes and the edges of streams like a lotus. The first thing that catches your eye is the vibrant color of the flower, be it pink, purple, yellow or white, it grows in calm waters, swaying slightly in the wind. Not only is it popular for its appeal, but it is considered a religious symbol in many parts of the world.